AI’s impact on jobs: (not) the elephant in the…

AI driven automation is happening. It benefits the most and it causes anxiety, even fear, to many more. It has captured the imagination of many futurists and occupies prime time in the diaries of core global decision makers at governments, large corporations, policy makers, and every individual. But there is subtle question that bothers me about all this: is AI the elephant in the room? Is AI that out-of-the-ordinary phenomenon that nobody acknowledges, or willing to acknowledge, that finally matured after 60 odd years of hard work and is now capable of automating millions of jobs worldwide that could render tens of millions of people unemployed overnight? Or is it something else that we fail to acknowledge or even grasp?

Undoubtedly, AI is commercially attractive. There are a lot benefits of applying AI driven technologies to automate routine, mundane, repetitive tasks. And of course, that automation is commercially attractive as it can free up time from full time employees (FTEs) to concentrate on higher order tasks or redeploy them to do other things and increase the output and profitability of the business. At least that’s the narrative, the nice-picture outcome. But there is also the ugly picture outcome: AI driven automation is not handled properly, lack of planning or ever resources could lead to no redeployment of roles or there are no higher order tasks to do, and hence leads to straightforward replacement and job losses. That’s the core of the jobs’ fear narrative from some of the sceptics of AI driven automation technology.

If we look at the evolution of the corporate world over the past 20-30 years a lot has changed, and the pace of change is continuing fast. As McGowan points out in her excellent informative piece: “the purpose of the company has changed from one that aggregated work effort in order to optimize productivity and create value for customers to one that aggregates profitability in order to create value for shareholders”  and this has had a profound impact on the treatment of material resources in the 21st century where the intangible products take precedence over material (for example, software vs. brick-n-mortar, and the millennials’ values for shareable use of assets vs. ownership). It has caused to: “shifted the workforce from an asset to develop to a cost to contain as companies created more and more financial value with fewer and fewer humans” 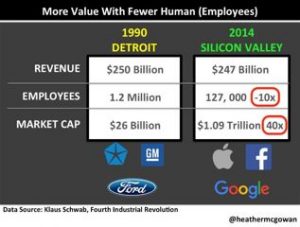 The picture on the left, worth a thousand worlds (as famous ancestors would say): In a space of less than 30 years, leading software companies in the States produced 40x market cap over traditional manufacturing companies with 10x fewer FTEs.

Treating your FTEs purely as a cost though, can have profound impact on the future of employment in the face of AI-driven automation, as I will analyse further down. But first, let’s also have a look at the change in jobs’ requirements over the past 30-40 years. It appears that by 2014 over 90 million jobs in the States involved some sort of cognitive intensive function. That almost doubled since early 1980s whereas routine jobs, manual and non-manual, experienced a less impressive growth. 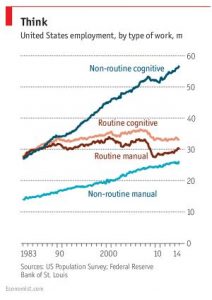 The growth of cognitive based jobs is not a surprise given the knowledge economies we have today and it also provides an easier understanding on where and how to apply AI driven automation at large: AI is good when we have jobs with frequently high volume tasks, that are of repetitive nature and can be, ideally, codified (e.g., we can express them in a way that machine understands what to do without intuition or human supervision). AI is also good when we have pure brute-force situations, such as speed of calculations, memory capacity, consistency, lack of fatigue. On the other hand, the cognitive intensive tasks that humans perform better, involve soft skills, negotiation, persuasion, situational awareness, cultural sensitivity, historical context, emotional intelligence, problem solving, intuition, empathy, creativity and so on. And it appears that these skills are not only needed for the knowledge intensive job environment of today, but are also highly valued as a supply-demand market making force: the growth of skilled craftsmanship  in core markets, and importantly the shift in public perception and demand for such products is evident, as people turn to hand crafted, artistic and human produced, products, over mass produced, mechanised clones. That’s an interesting trend to watch in the era of full automation and over-supply of mass produced artefacts.

AI driven automation can take its toll even on the producers of such products. The research field of program synthesis (in layman’s jargon, code writing code) is not new, but the recent advances in machine learning, bring a new force to the table: DeepCoder uses a technique that creates new programs by piecing together lines of code taken from existing software – just like a programmer might. Given a list of inputs and outputs for each code fragment, DeepCoder learned which pieces of code were needed to achieve the desired result overall. One advantage of letting an AI loose in this way is that it can search more thoroughly and widely than a human coder, so could piece together source code in a way humans may not have thought of. DeepCoder uses machine learning to scour databases of source code and sort the fragments according to its view of their probable usefulness.

However, the creators of such endeavours are quick to dismiss the possibility of using such techniques to replace human programmers. Rather, it could take away the mundane, repetitive parts and human coders will focus on sophisticated, higher order tasks.

So, there is a pattern emerging from all the narrative about AI driven automation and potential impact on jobs: AI automation of jobs will happen, one way or another, jobs will be impacted, but not lost; rather, they will be redeployed to do higher order tasks, focus on parts of the job which are denser and require cognitive skills that machine don’t possess. All that is good, in theory, but one thing that becomes more and more unclear as the narrative goes and gains traction is: which are these higher order tasks that so many millions of job holders, globally, will be redeployed to do? And how come we haven’t managed to fill up those high order tasks and jobs all these years and only now that finally AI automation is here, we seriously consider them? To tackle these questions, let’s have a look at the nature of employment and jobs:

Revisiting the notion of employment

It’s not only the biological limitations of humans to perform certain tasks at speed (that machine can do faster) that justifies the move to automation. One should look also at the quality of work, employee engagement, sentiment, motivations, etc. It appears that in the wake of 21st century employee engagement and motivation at work is a big issue

So, is AI the elephant in the room?

Let’s revisit the initial probing question: AI could indeed be the elephant in the room; all the signs are there, meteoric growth, transcends industries and sectors, remarkable results compared to human level intelligence, abundance of hardware and software resources to conduct AI at a large scale (with more work to do there), and finally a society that is warmed up enough to the notion of AI as “business-as-usual”. But, my hunch is that the true, and big, elephant in the room is not AI. AI will happen, and fast enough for some of us to even notice. The elephant is the room is the consequences of applying AI at large: a complete, and overdue, revamp of our employment believes, frameworks and structures. Redefine what work really means in 21st century, revisit our engines of employment and the regulations that govern them. All that re-thinking and remaking is the elephant in the room; AI is just a trigger, albeit the strongest we ever had. It’s going to be a very interesting and century-defining next 10-15yrs!